Last week our family had a long discussion about perception. My husband and I were trying to explain what perception is and means to our 8 year old son. It's a complex concept and I'm not sure he fully wrapped his head around everything we were saying. Funny thing was, we ended up rehashing an earlier argument between my husband and I with my son weighing in. The differences in perception between the 3 of us was entertaining. The reality of what had occurred to spark the original disagreement, and the take-aways we each had didn't fully line up. Nonetheless, it ended up being a great exercise for our son to get some experience with empathy and putting himself in other people's shoes to see their point of view.

There's a picture that has gone around the Internet for awhile now that I always find fascinating: 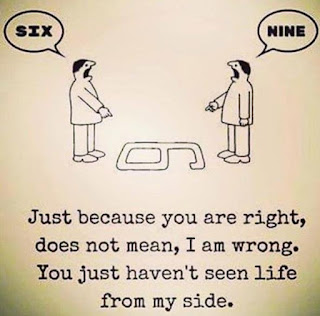 This is perception.
I have seen additional memes with the text crossed out. Their focus is on reality and not perception. The reality is (we assume), that someone wrote either a six or a nine. So in reality, one of those people is right and one is wrong. The real issue in life and communication and relationships is when we believe our perception is reality without taking the time to understand that not everyone sees what we see or believes what we believe. The struggle is finding a balance between understanding others and being open minded to their views without losing sight of reality, and while retaining our own thoughts and beliefs.

Some things can be accepted as just a difference in perception. I may see a red cardinal in my backyard and to me, it's just a bird. A friend may see the same thing and declare it is a sign from a deceased loved one. We have different beliefs and therefore different views on the same event. In this case, our perceptions are the reality as there is no way to know different. In the case of the meme above, nine could walk over and say "I see why you think this is a six. But let me show you how it is actually a nine." Then maybe there are context clues and supporting data (an eight and a ten out of frame, addresses on buildings, whatever!) to prove that the reality is nine. It doesn't make the six's perception any less real... but now that six has the duty to accept that his perception and reality are not the same.

I would say that perception is reality, until we know more. We can only accept what we see and know and believe. The challenge is shifting our perception from just real to true reality once we know more beyond our original scope of sight.

How many times has perception played a role in a disagreement in your life?

Once upon a time (circa September 2008) I created a blog called Random Ramblings. Prior to that I had a 'blog' on MySpace (anyone remember those?!), numerous written journals throughout childhood and into young adulthood, and just generally enjoyed writing my entire life. I was a 20-something newlywed, just over a year into my marriage and 6 months into home ownership. That fall I posted 47 times to my blog about the most random of things... appropriate for my blog name lol
109 posts in 2009, 104 posts in 2010... I had a little blog community and it was all for fun. Back in those days, most people weren't monetizing their blogs or running a business through them. The "How to quit your job and become a full time millionaire blogger in 3 days!" articles didn't exist. Those were the good ol' days for sure. In 2011 I had my first child and my blog quickly evolved into a digital baby book of sorts, capturing everything in an effort to remember those fleeting moments where the days are long but the years are so painfully short. Ultimately, I switched to 'private' and my blog became solely a personal journal/ letters to my kids.

For the past year+ I've been longing to write again. Somehow, that's so much easier said than done. I don't feel well-equipped for the blogging world as it stands now. I'm not ready to buy a domain and brand myself and determine a niche. I just want to write. I want to create a community again of like-minded people who enjoy reading what I put out there. Others who want to share their stories and connect. I have started three different blogs in the past year, gotten overwhelmed and ignored them all.

So, here's hoping that this isn't another '1st post' that will ultimately be deleted. Here's hoping I stick to it this time and develop some content I can be proud of, keep the pressure off, write for the sake of writing, and just see where it all goes.
Posted by ThoughtsON at 12:03 PM 1 comment: